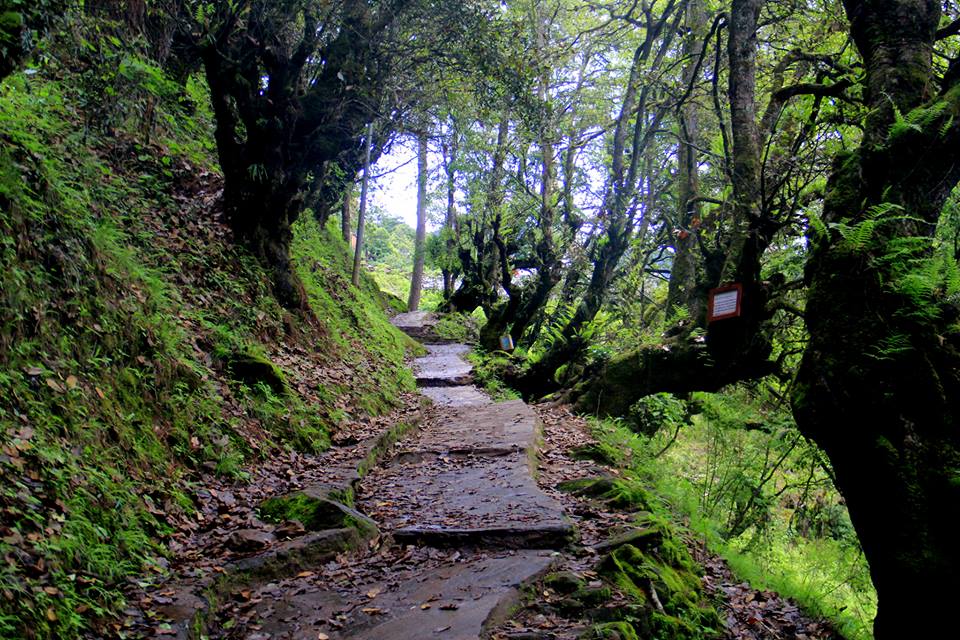 Think lush green valleys, Tibetan flags blowing in the wind, bright blue sky & people walking in their traditional clothes, Gho & Kera. Yes, I’m talking about Bhutan, Land of the Thunder Dragons. Bhutan is mystical & truly other worldly. The only country in the world which measures itself in Gross National Happiness. It’s a big idea for a tiny state & they implement this idea fully. 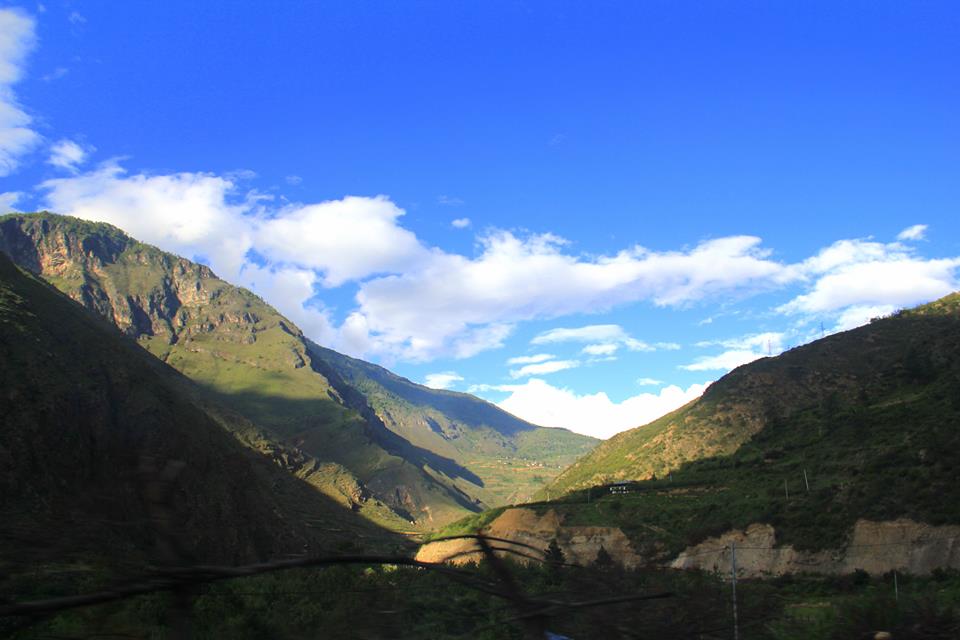 Even before I landed in Paro, Bhutan, I knew that my journey here is going to be magical. From Delhi, India one can take the Druk Air which flies directly to Paro, Bhutan. On the flight to Bhutan, I caught my first glimpse of the mighty & stunning, Mt. Everest. I heard the Pilot’s voice saying, “Turn to your left & you will see Mt. Everest soaring above the clouds.” There it was, almost touching the sky. It’s only when you see it from a vantage point that you realise how high the mighty mountain really is. It left me breathless, I couldn’t stop staring at it. It’s a true wonder of nature. 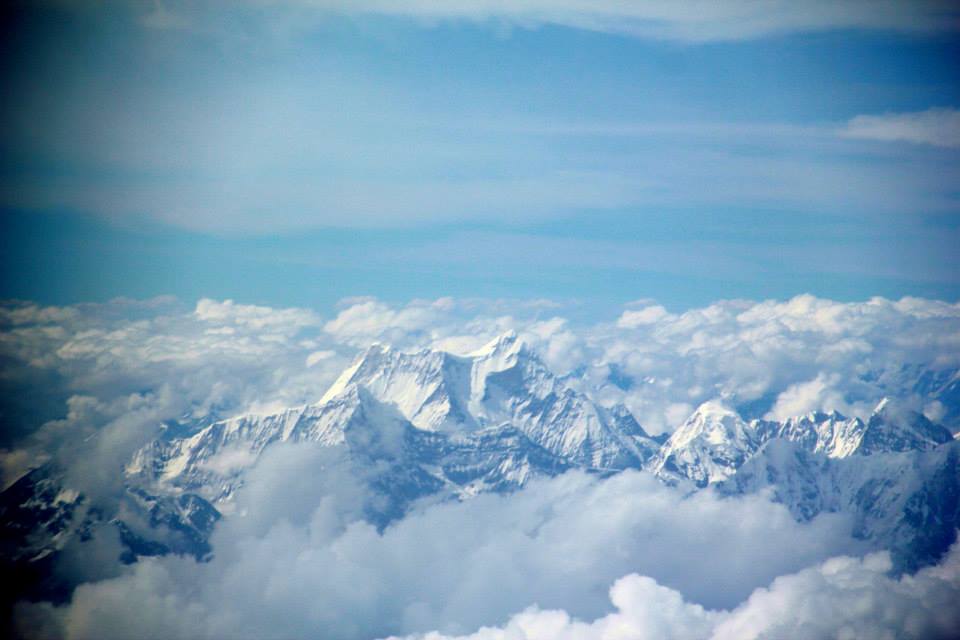 After I did catch my breath, I realised that i had landed in Bhutan. Even the airport, has a different feel to it. It’s dotted with billboards of Bhutan’s King, Jigme Khesar Namgyel Wangchuck & their Queen, Jetsun Pema, who welcome you to their land. The airport has a very tiny runway in the midst of mountains & an even tinier airport. However, it’s truly charming. There’s an inherent warmth within the people of Bhutan, their smiles reach their eyes which reflects the beauty of their hearts. I wonder, does this have to do anything with Buddhism & what it teaches them?

I found the answer soon enough. We had taken a guide for our tour in Bhutan, it’s imperative that you do so too, as it’s tough to communicate with their people. Very few speak English. Our guide, Sangay Dorji, became a dear friend. In fact, two years later we are still in touch with him! Speaks loads about the kind of people the Bhutanese are, doesn’t it? 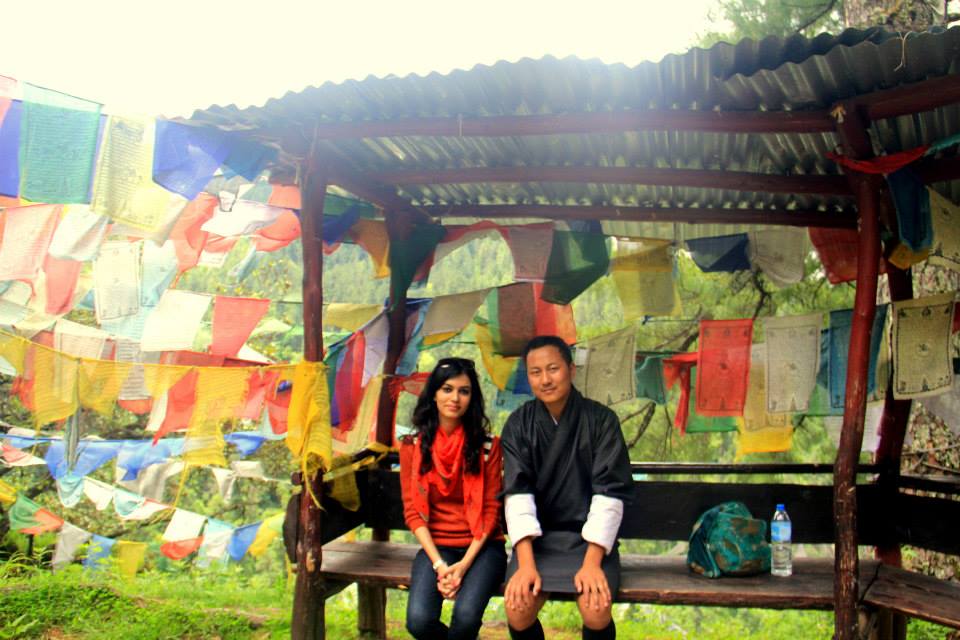 He told us that Buddhism is not only a religion there, it’s a way of living. It’s so inherent in their lifestyle that theirs a buddhist alter in all of their homes. A place where people pray everyday.

Sangay guided us every step of the way, explaining the culture, history & geography of his land. I could sense a pride in his speech every time he spoke about his King & Queen. He told us, there’s close to zero crime rate in Bhutan. In one year, there’s merely one case of murder & robbery in the whole country! The people of Bhutan live peacefully & safely under the Monarchy rule.

From Paro, we made our way to Thimpu, the capital of Bhutan. It’s the only capital in the world without any traffic lights! The architecture of the Bhutanese houses is lovely, with thatched slanting roofs which is usually coloured a warm red. Lot of the sight seeing in Bhutan will involve visiting the Dzongs, which are royal or ex-government buildings. They are usually attached to monasteries.

The Punakha Dzong is the biggest one in the city & it’s a must visit. It’s one of the most beautiful monasteries we have ever seen. The paintings on the walls are very intricate & the walls are high. The Buddha statue is also quite big & majestic. 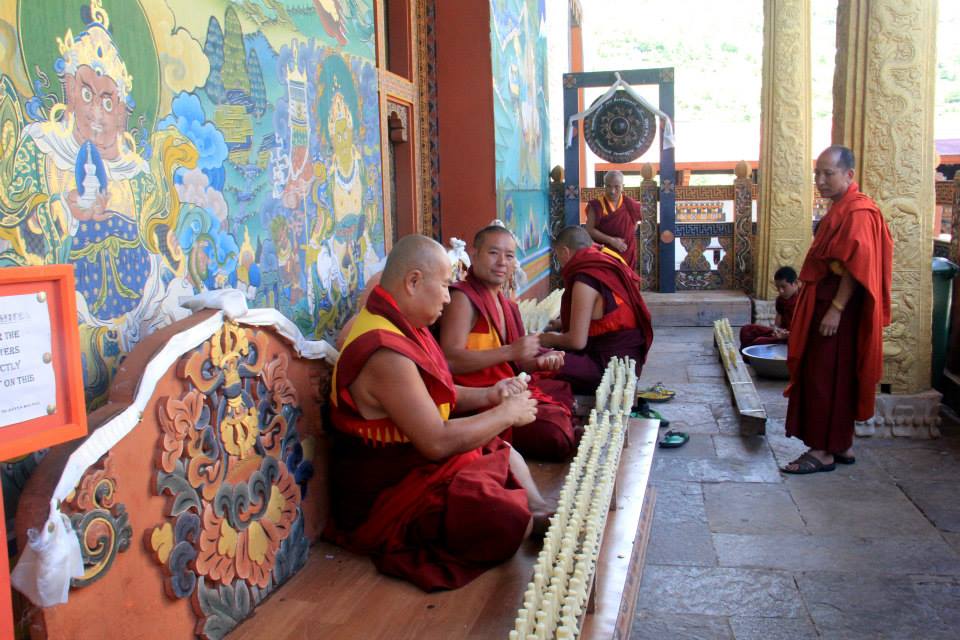 Next on our itinerary was the mighty, Tiger’s Nest. It was built in the 7th Century by the a monk who it was believed came flying upon a Tigers back and landed on a cliff, hence the name Tiger’s Nest. He then went on to subdue the demons which resided in the valley. 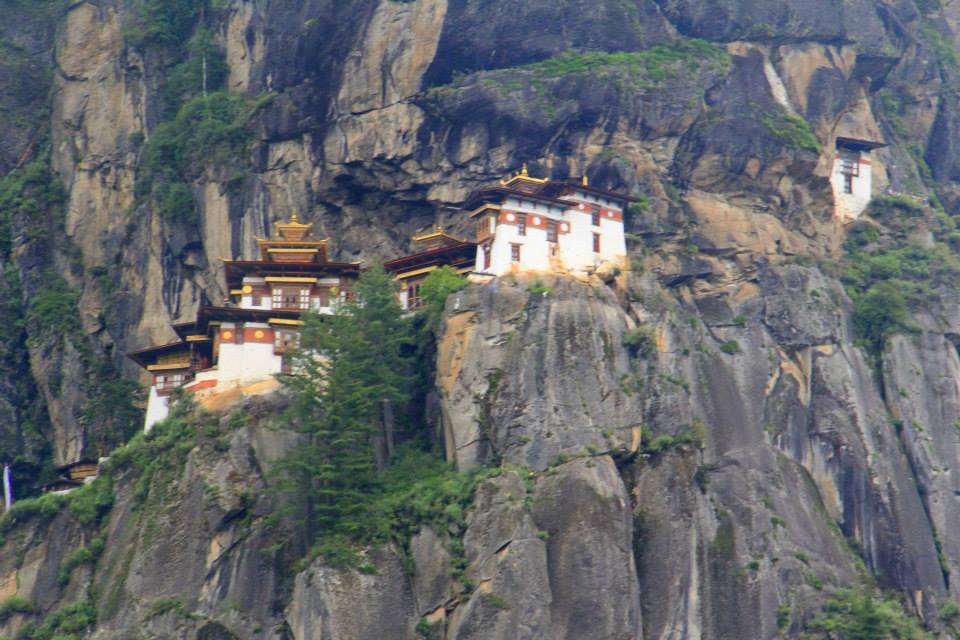 The trek to the Tiger’s Nest is slightly long & arduous, but definitely worth it. It takes around 3-4 hours one- way. You can also ride on a donkey’s back, if the trek becomes too much. There are some great vantage points on the way to the Tiger’s Nest from where you can catch a great view of the monastery.  The best view undoubtedly is when you reach the hanging cliff. The experience is wonderful & there’s no way that you should miss going to the Tiger’s Monastery.

From here, we ventured to the stunning Punakha valley. It’s surrounded by hills & there are vast green rice fields which were even visible from our hotel room. We stayed a few kilometres away from the actual city, we were in the Chimi Lhakhang village. It’s the most extra-ordinary village here, a village which worships the phallus. On every house, you will see a big (excuse the pun) photo of a phallus. It might catch you off-guard at first, but you will get used to it. The reason for this is, this village has a temple of fertility. It was founded by Drukpa Kuenley who was known as the “Mad Saint” or “Divine Madman”. There’s a fascinating story behind the creation of this temple. The “Mad Saint” used his “powers” (his phallus) to subdue a female demon. Whether you believe  the legend or not, it’s a fascinating place to visit. Many Bhutanese come here, to take blessing from the “Divine Madman” if they are having troubles in giving birth. 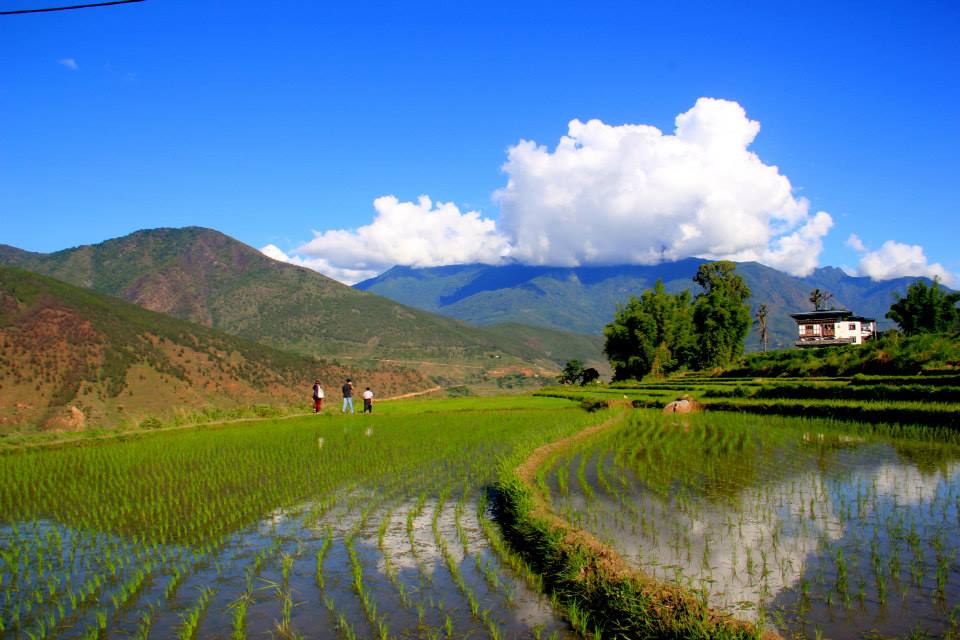 Visiting Bhutan, is like visiting a land where time has stopped. You will feel like you have been transported back to some other century. It’s mystical, beautiful with wonderful culture & even more wonderful, warm people. 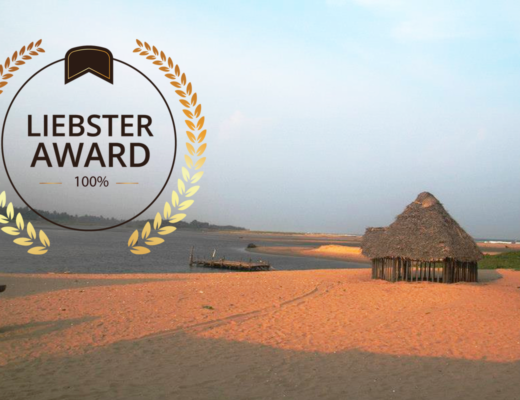 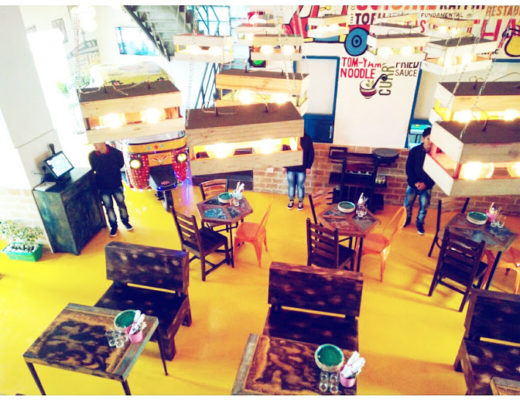 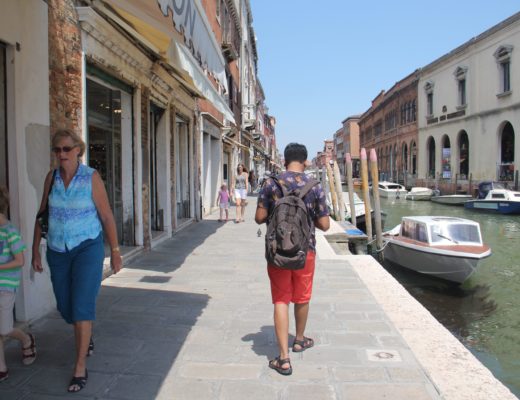 How To Save Money For Travel